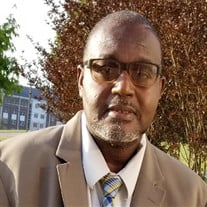 Reverend Clifton J. Halfacre, Sr. accepted his calling and preached his ﬁrst sermon at Pine Grove in 1994. He then later served the Lord by leading in such roles as Sunday School Teacher, Assistant Pastor, and Youth Pastor under the leadership of Pastor Charles Brown. He later transitioned into a leadership role, where he served as the Pastor of Muldrow First Baptist for 7 years in Starkville, MS. Later in life, Reverend Halfacre was led in a different direction. He started to attend Antioch Witness Church under the leadership of Pastor Glenn Harris Sr. ,where he remained a faithful member until his departure. There he served the Lord through being the Mighty Men ministry leader, jail ministry leader, and an associate minister of the church. Clifton was one who never met a stranger. He was quick to give you an uplifting word from the Bible to feed your spiritual life and cook you food to feed your natural man. Some of his favorite quotes he will be remembered by are: "Prayer Works," I'm going to do all I can as long as I can while I can," and lastly, "Don't let the facts change your faith, but let your faith change your facts." His memories will forever be cherished by his wife, Drusilla Halfacre of 32 years; four daughters: Sheila Bush of Huntsville, AL; Jalisha (Travis) Tate of Tuscaloosa, AL; Kimberly Halfacre of Starkville, MS; and Jabriah Halfacre of Huntsville, AL; one son, Clifton James (Erika) Halfacre Jr. of Brandon, MS; grandchildren: Kai Heaven Halfacre, Blaire Kennedy Townsend, Riley Carter Halfacre, Aubrey Rose Tate, and Harlem Amir Halfacre; one aunt Mrs. Luella Sharp Leesburg, Florida; a loving mother-in-law, Annie Lois (Mama Nan) Bush; two brother-in-laws, Frederick Bush and Virgil Bush and a host of nieces, nephews, other relatives and friends.

Reverend Clifton J. Halfacre, Sr. accepted his calling and preached his &#64257;rst sermon at Pine Grove in 1994. He then later served the Lord by leading in such roles as Sunday School Teacher, Assistant Pastor, and Youth Pastor under the leadership... View Obituary & Service Information

The family of Reverend Cifton James Halfacre Sr. created this Life Tributes page to make it easy to share your memories.

Send flowers to the Halfacre family.