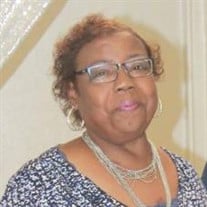 She leaves to cherish her memories, her husband of 35 years, Andrew (A. J.) Buckhalter, Sr.; two daughters: Tameka Rice and Arnetta Buckhalter, both of Crawford, MS; one son: Armand Rice, Sr. of Crawford: and one step-son: Andrew Buckhalter,... View Obituary & Service Information

The family of MRS. ELNORA BUCKHALTER created this Life Tributes page to make it easy to share your memories.

She leaves to cherish her memories, her husband of 35 years,...

Send flowers to the BUCKHALTER family.