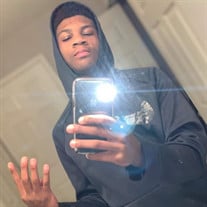 JaWaune Lee Pearce was born January, 30, 2004 at the Oktibbeha County Hospital to Mr. Derrick Pearce (Starkville, MS) and Ms. Aneisha Wright (Nashville, TN). He professed a belief in Jesus Christ at an early age and became a member of Pine Grove Missionary Baptist Church in Starkville, MS under the leadership of Pastor Charles Brown where he remained a member. JaWaune was a high-spirited, energetic kid that loved doing what most 17-year-old boys do, playing video games, hanging out with his friends, playing sports, traveling, and spending time with his family. He had a very likeable personality that helped make him popular in school amongst his peers. His favorite sports to play were football and baseball. His favorite football team was the University of Alabama Crimson Tide. He enjoyed being outdoors, fishing with his father, and going on trips with his mother. He worked as a part-time stocker for Walmart alongside his brother, JaDerun and his mother. He expressed interests of being a professional barber and becoming a successful rapper one day. JaWaune is preceded in death by his grandparents, Donald and Angie Cunningham; grandfather, Charlie Tutton, and an uncle, Demetric Wright. He leaves to cherish his loving memories; his mother, Aneisha Wright; his father, Derrick Pearce; one sister, Bailey Sanders; three brothers: JaDerun Pearce, Jessiah Pearce, and J’Braylon Hill; two loving grandmothers: Dorothy Pearce (Starkville, MS) and Ire Darden (James) (Dudley, NC); a great-grandmother, Margaret Middleton (Batesville, MS); four uncles: DeWayne Pearce (Starkville, MS), Dameon [Brittany] and Derrick [Zundra] Cunningham (Batesville,MS) and Gerry [Geina] Darden (Dudley,NC) and a host of great aunts, great uncles, cousins, relatives and friends.

The family of MR. JAWAUNE LEE PEARCE created this Life Tributes page to make it easy to share your memories.

Send flowers to the PEARCE family.