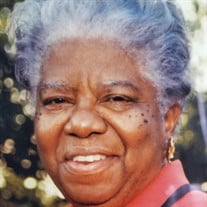 Pastor Jean Miles was born Jean Carolyn Butler on March 30, 1938 to George and Bennie Butler in Greenville, MS. Her mother moved to Chicago when Pastor Miles was a girl. Pastor Miles was raised by her grandmother, Dollie Robinson. Pastor Miles received her early education from Sacred Catholic School in Greenville, MS until the death of her grandmother in 1947. Pastor Miles then moved to Chicago to live with her mother. Upon arriving to Chicago, she entered the Chicago Public School system. The teachers were so amazed with the knowledge that she possessed that Pastor Miles was told that she had no business being in the grade that she was in and was put back a year. This event caused Pastor Miles be dishearten. She left school before graduating from high school. She met and married Larry Canty at the age of sixteen. Soon after their marriage, Pastor Miles became an executive for Spiegel. Her marriage to Mr. Canty was not a happy union; however, she was introduced to the Church of the Living God CWFF through this marriage. She began attending and being an active member in the Church of the Living God CWFF Temple 120. After her marriage to Mr. Canty ended, she met David Miles. He also began attending and being an active member of the Church of the Living God CWFF Temple 120. They married and became a great asset to the body of Christ. They both accepted their calling into the ministry. She was a very active missionary in the church increasing the VBS numbers exponentially. She later was elevated from missionary to Evangelist. She also sang in several choirs. Pastor Miles was known for using her gift of song to win many trophies for their local temple at the National Convention as well as minister to the spirits of the people. One of her trademark songs, “I Can Depend on God” are the words that she lived her life by. After Elder Miles became an ordained minister in the Church, he received his first charge, which was the Church of the Living God CWFF Temple 306 in Starkville, MS. They began their ministry in Mississippi by traveling back and forth from Chicago to Mississippi on weekends until they were able to find a home. Their membership was small and in 1979, God gave Evangelist Miles the vision that the church should open a daycare center to supplement the income for the church. After opening the daycare, Sister Miles, who so many affectionately called her, was the assistant director. She worked with Sister Mary Prater and other volunteers from the church, who helped raise over 1,000 children as well as minister to the parents in accordance with the Spirit to help mold families that were no longer dysfunctional. She retired from the daycare center in 2008 to pastor full-time. Through God’s mercy and grace there were no injuries to any child while in operation. Overseer Miles and “Sister Miles” were an awesome tag-team duo for the Lord until his demise in February of 2002. She was also preceded in death by her mother, Bennie Butler. After which, God allowed her to pick up the mantle as pastor of Temple 306 in August of 2002. As she progressed in her ministry, she met many leaders who not only impacted her life, but she impacted theirs as well. She continued the assignment that God had given her by sharing and giving to others in the community, the city, local organizations, district conferences and the National Brotherhood. Anyone that came past her life was touched by her in word or/and in deed. She never met a stranger. She leaves to cherish her love, words of wisdom, and memory; her children, her grandchildren, her godchildren, church family and friends

The family of PASTOR JEAN CAROLYN MILES created this Life Tributes page to make it easy to share your memories.

Send flowers to the MILES family.