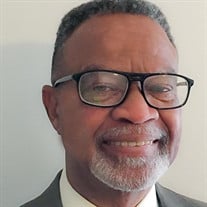 Rev. LeRoy Henry, III was born on October 1, 1952, in New Augusta, Mississippi. He was the eldest of six children born to the union of the late Rev. Dr. LeRoy C. Henry, II and Dora Nell Henry. He confessed Christ as his Savior at an early age in 1968. He spent many years at Mary Magdalene M.B. Church in Chicago, IL where he served as a dedicated Sunday School Teacher, Sunday School Superintendent, and also as a musician. Rev. Henry received his formal education at Lindblom High School in Chicago IL, graduating in 1970. He continued his studies at William Carey in Hattiesburg, MS where he received a bachelor’s degree and later furthered his education at the Beeson Divinity School of Samford University in Birmingham, AL. On October 30, 1976 he was united in holy matrimony to Mechille Price, and they were blessed with four children; Aleise, LeRoy, Brandon, and a newborn son that preceded him in death. Rev. Henry accepted the calling on his life at the age of 23, serving as Pastor of Unity Baptist Church of Columbia, MS and Friendship MB Church of Louisville, MS. He was serving as interim Pastor of Beth-el MB Church in Starkville, MS at the time of his passing. He also belonged to numerous organizations throughout the years. His greatest moments were when he was in the pulpit preaching. One of his last sermons he preached was on January 3, 2021. It was entitled “Somebody Ought To Say Something”. Some of his other most memorable sermons include “Climbing High Mountains On My Way To Hell”, “The Power Of The Tongue”, and “That’s Enough For Now”. Rev. Henry heard his Savior say well done thy good and faithful servant on Tuesday, January 26, 2021, with his family by his side. In addition to his newborn son, he was preceded in death by his father Rev. LeRoy Henry, II and mother-in-law, Gertrude Price. He leaves to cherish precious memories his wife, Mechille Henry; his children, Aleise Danielle (Rundell) McGowan of Columbia, MS; LeRoy C. Henry, IV of Atlanta, GA; and Brandon Lamar Henry of Grayson, GA; three grandchildren who were his pride and joy: Alexandria Dominique Henry, Rundell Lavell McGowan, Jr., and Cole Preston Henry; his mother, Dora Nell Henry; two sisters, Irma (John) Jeffries and Angie (Nathaniel, Jr) Motton; three brothers: Milton Henry, Warren L. (Sharon) Henry, and Stephen (Tricie) Henry; one sister-in-law, Beverly (Rudd) Price; one brother-in-law, Christopher Price; five God-children; two honorary daughters; and a host of nieces, nephews, relatives, and friends. Rev. Henry touched the lives of so many people in many ways that are difficult to express. Although he leaves behind a huge hole that will never be filled in the hearts of all who loved him, he now rests in the arms of his Heavenly Father. He was truly loved by many and will be greatly missed. PLEASE JOIN US IN THE CELEBRATION OF LIFE FOR REVEREND LEROY HENRY, III via YouTube @ Beth-el M.B. Church Media, Facebook @ Beth-el Church or The Church Website @ beth-elmbc.org. (Look to the left side of the page and select ONLINE STREAMING.) If you do not wish to enter the church, you may remain in your car; tune your radio to 88.5 FM and listen to the service.

Rev. LeRoy Henry, III was born on October 1, 1952, in New Augusta, Mississippi. He was the eldest of six children born to the union of the late Rev. Dr. LeRoy C. Henry, II and Dora Nell Henry. He confessed Christ as his Savior at an early... View Obituary & Service Information

The family of REVEREND LEROY C. HENRY III created this Life Tributes page to make it easy to share your memories.

Send flowers to the HENRY family.