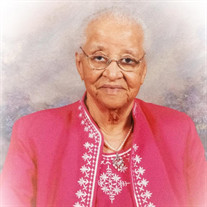 Martha Ann Rice was born on May 3, 1924, to the proud and loving parents, James "Buck" Rice and Bessie Ozella Rice in the Hickory Grove community of Oktibbeha County. Bessie was a devoted housewife and James supported their family as a share cropper. Martha was the last of James and Bessie's fourteen children, dying on June 3, 2021 in Oktibbeha County Hospital. In 1946, Martha met Clinton King Vaughn at John Arthur Peoples' Cafe where she worked as a waitress while attending high school. Clinton was serving as a soldier in the U.S. Army during World War II. After dating for four months they married and she became Martha Rice Vaughn, and to this union were born Dorothy Ann, Evelyn Delois, and Clinton Jr. Martha was determined to make a better life for herself and continued her education receiving a diploma from Oktibbeha County Training School around 1946, a B.A. in Elementary Education from Tougaloo College in 1959, and a Master of Education in Elementary Education from Mississippi State University in 1970. Martha nurtured a genuine love and concern for young people, leaving an amazing legacy as a dedicated teacher for over 40 years. Her schools included Blackjack Elementary, Ebenezer Elementary, Beat One Elementary, Overstreet Elementary, Rosie Stewart Elementary and Ward Middle Grade. She also served as principal at Ebenezer, coach for both boys and girls basketball teams, 4H Club Leader, Den mother for Cub Scout Troop 40, and school nurse at Ebenezer Elementary. Clinton and Martha also sponsored the boys baseball team in the Ebenezer community and Beat One Elementary School. Martha and Clinton were business partners in many endeavors throughout the years including a community auto repair shop, radio and TV repair, a shoe shine parlor on MSU campus, and Vaughn Service Station. Operating from 1966 to 1976, the service station served as a safe haven for Civil Rights workers. The foundation of her life and character was Martha's belief in God. She found Jesus at East Sand Creek M.B. Church and also attended Blackjack M.B. Church as a child. Her membership remained at Ebenezer M.B. Church for most of her adult life where she served as President of the Mothers Board, V.P. of the Missionary Society, Chairperson of the Scholarship Committee, and Vacation Bible School Teacher for both Ebenezer and First Church of Christ (Hol.) U.S.A. Martha leaves behind her devoted children: Dorothy Ann, Evelyn Delois, and Clinton Jr. (Lashell); three grandchildren: Chandra (Edward Harden), Victoria and Clinton III; and three great grandchildren, as well as a host of loving nieces and nephews. She was preceded in death by her husband Clinton, and her brothers and sisters Lurline, Mildred, James, Mary Elizabeth, Harvey, Lois, Leo, Cleo, and Eva who survived to adulthood.

Martha Ann Rice was born on May 3, 1924, to the proud and loving parents, James "Buck" Rice and Bessie Ozella Rice in the Hickory Grove community of Oktibbeha County. Bessie was a devoted housewife and James supported their family as a share... View Obituary & Service Information

The family of MRS. MARTHA ANN RICE - VAUGHN created this Life Tributes page to make it easy to share your memories.