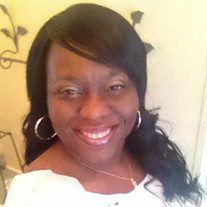 Shonda accepted Christ at a young age and joined Chapel Hill M.B. Church. She later joined Sixteenth Section M.B. Church, where she remained a member until her death. She loved her church family and she showed it through her hard work and dedication.... View Obituary & Service Information

The family of Mrs. Shonda Renee Neely created this Life Tributes page to make it easy to share your memories.

Send flowers to the Neely family.